Discover a selection of our fresh fish and seafood products 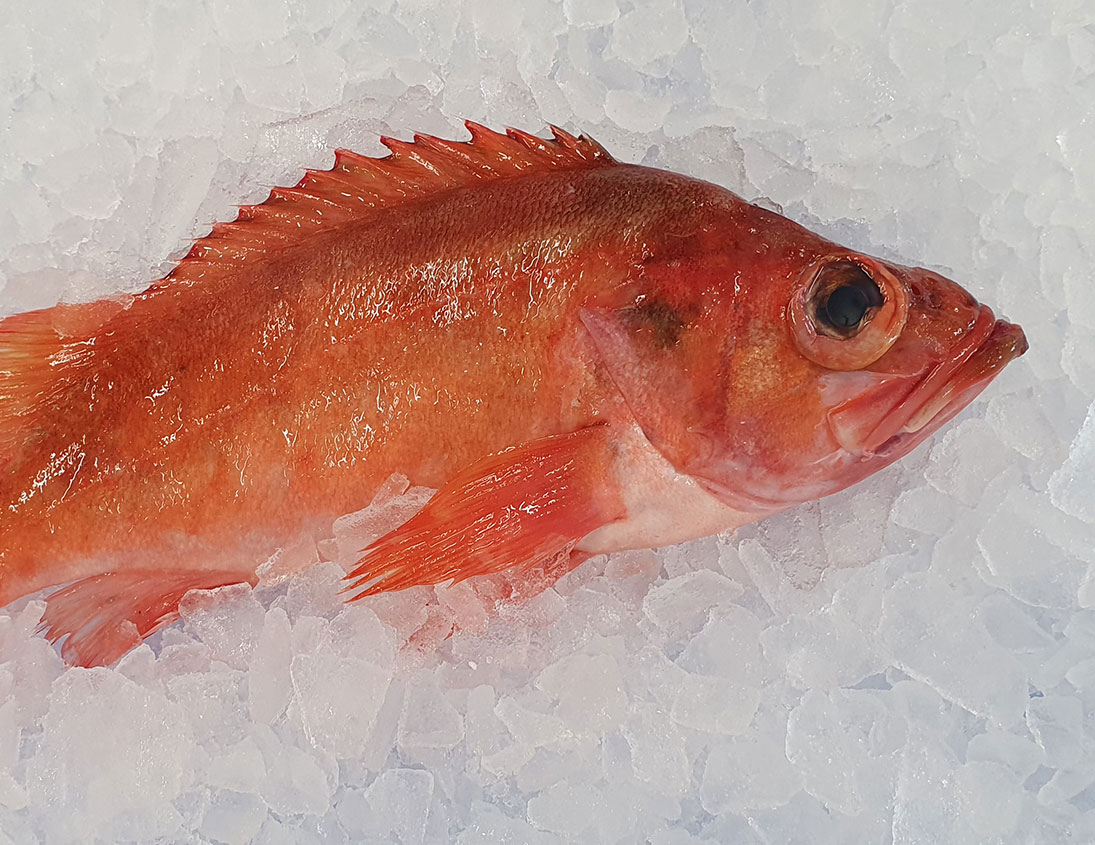 The redfish is mainly characterized by its strong red to golden shimmering. They live primarily in the North Atlantic. The biggest fish stocks are located around Iceland & Greenland. In order to secure the stock of redfish, the Trawler in Iceland now use selection grid and longer mashs on the trawl to protect juvenile redfish. 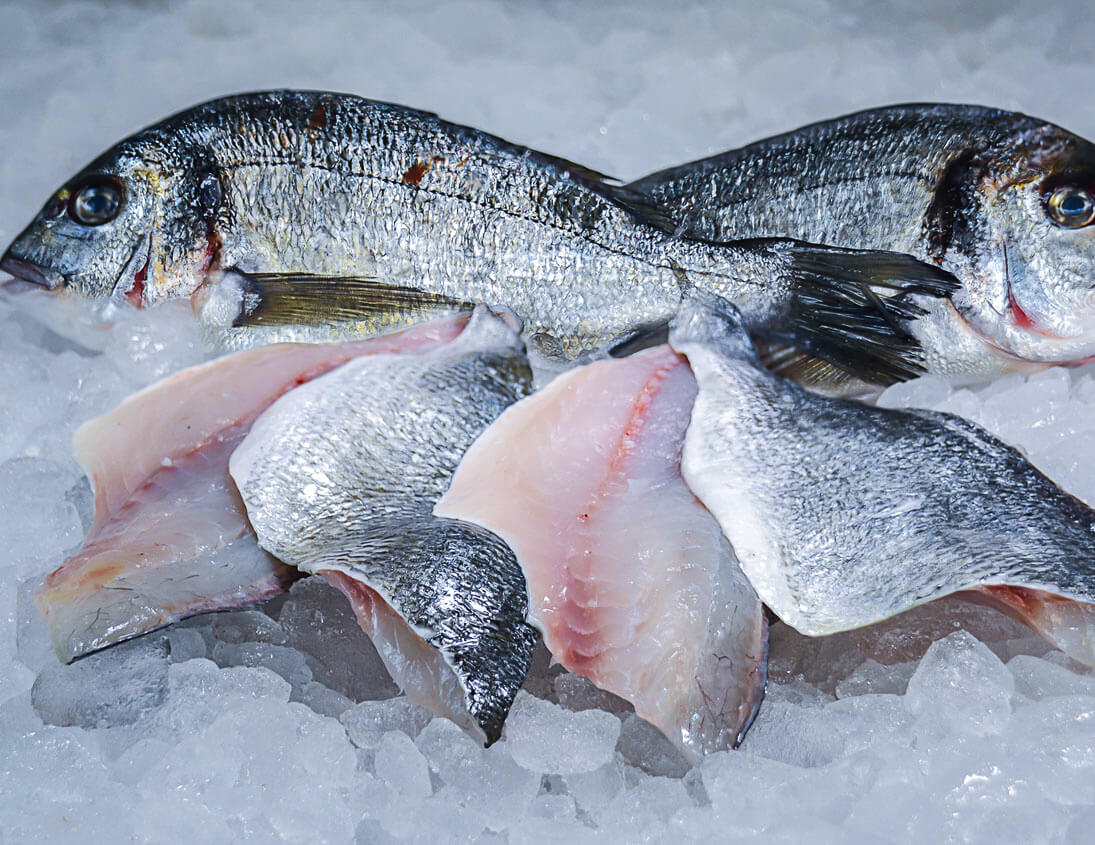 Seabream is a very popular fish from the mediterranean sea. It´s mostly farmed in greece, turkey and spain, but there are although wild caught seabreams. The second name is gilthead seabream. The name is based on the wide golden spot on each cheek. 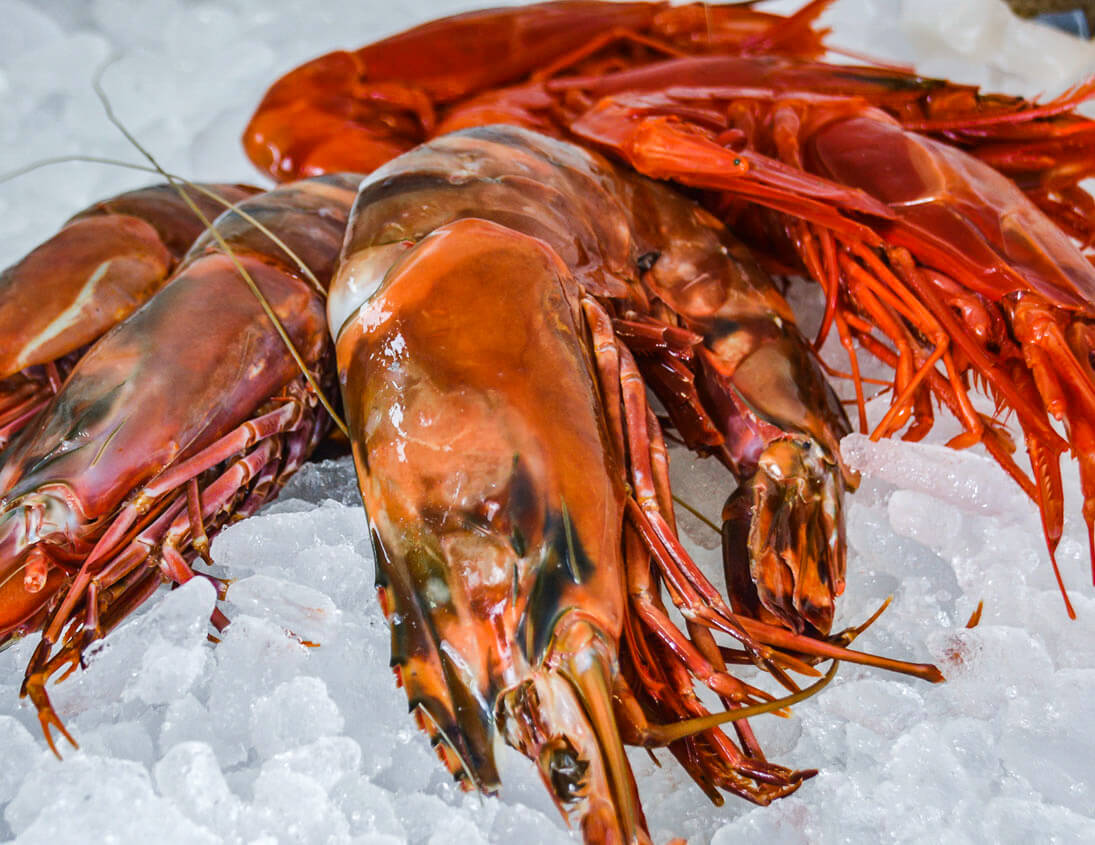 Carabineros, the red giant prawn is the queen of the king prawn. Carabineros are really remarkable because of their intense taste and their deep red color. That is the reason why they are also known as „brilliants“. 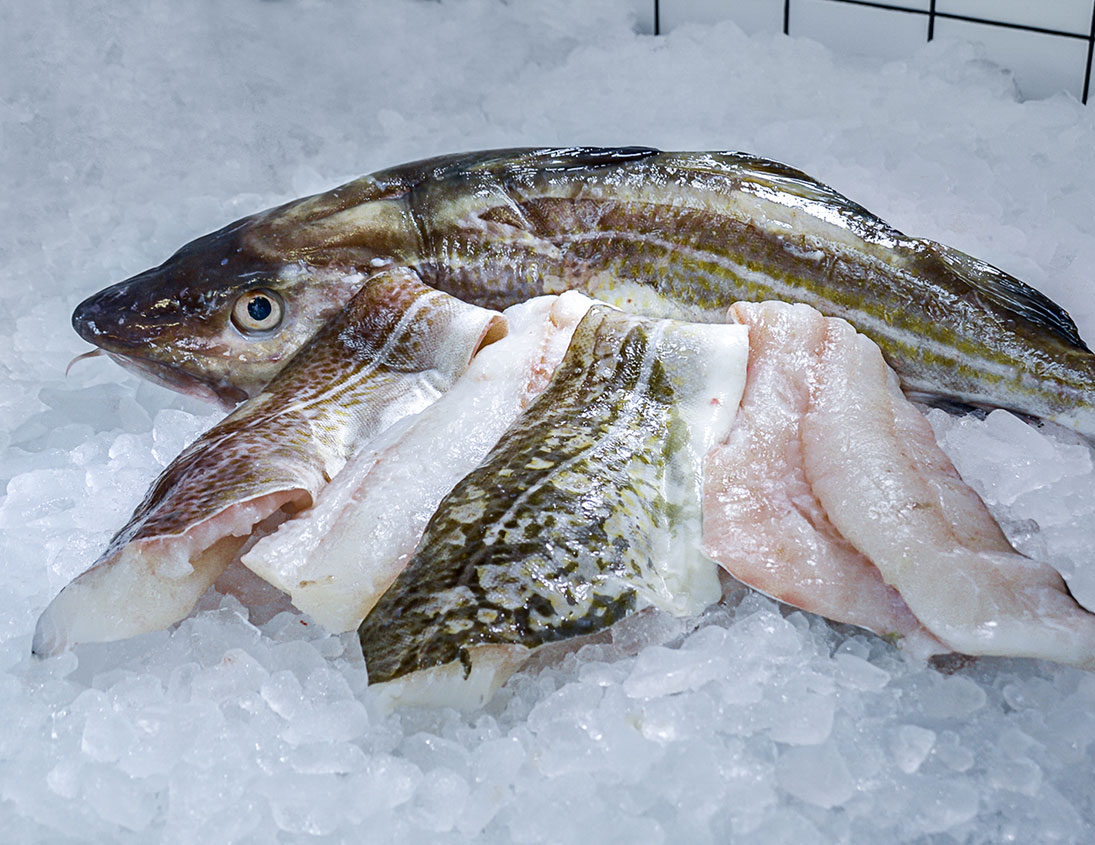 The cod is the best known fish. It´s most common in the North-East-Atlantic. There are two species of cod which are mostly traded, the winter cod (skrei – season from january to april) and the coastal cod, which is available the whole year. The cod is endemic to the coast of Norway.

It is smaller and lighter than the winter codfish. The skrei, which is an migratory fish, lives the most time of it’s life in the Barents Sea. Therefrom he swims more than 1000 Kilometre to the Lofoten to spawn there. Because of the high decrease of skrei fishing, there were declined catch quotas, to ensure the stock. The skrei is part of the most sustainable stock of cod of the world. 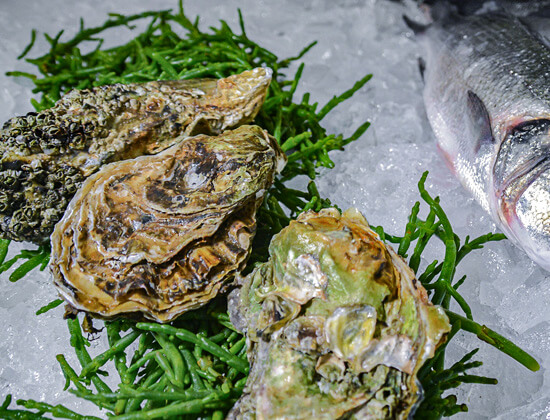 The giant cupped oyster (Crassostrea gigas) is commercially the most important species of oysters by a global market share of 93,7%. In France it´s called Huître creuse. This species of oysters is very robust and disease-resistent, it´s growing fast.

We dont only have dutch oysters, but also Fines de Claire, Fines de Normandie, Sylter Royale or Tsarskaya-oysters if pre-ordered! 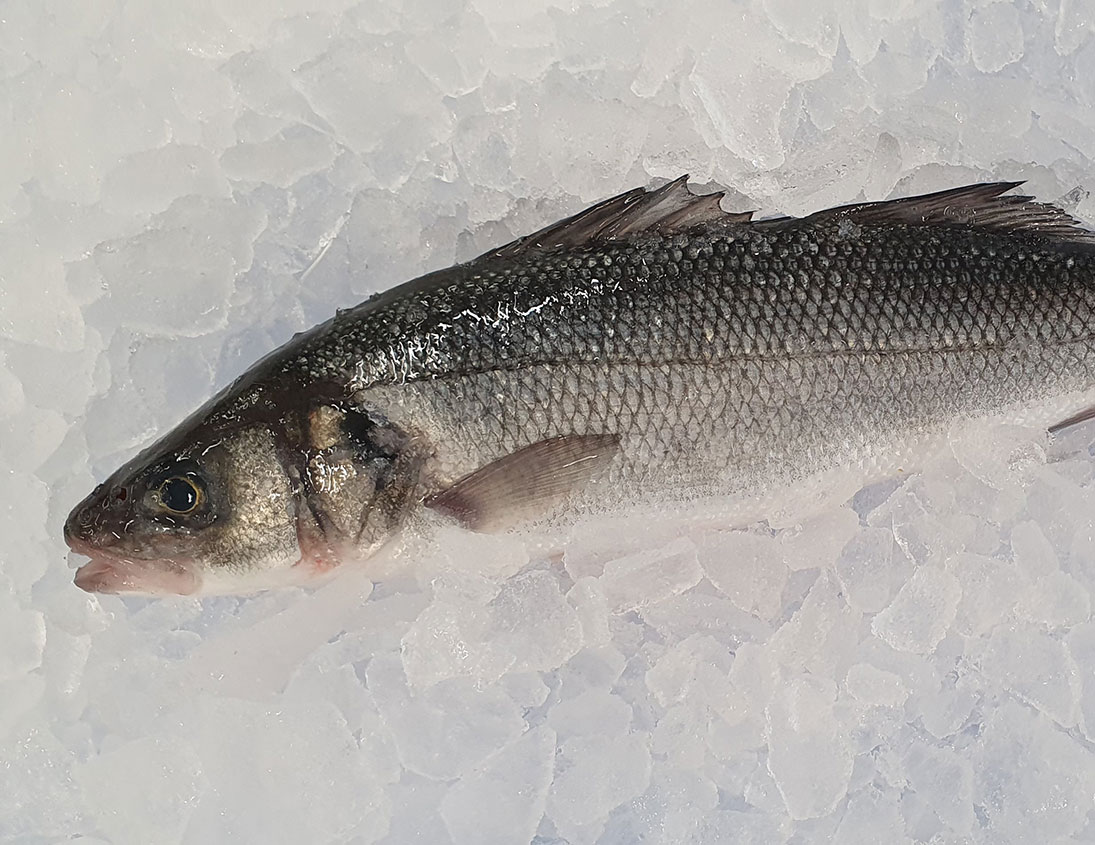 The sea bass or Loup de Mer is a versatile predatory fish, which was overfished in the Mediterranean area. Today it is pricewise highly calculated & the wild caught weighs from 1 to 3 kilograms. There are successful breeds in Greece, Spain, Italy and Turkey. So it is ensured that this gallant edible fish is available commercially. 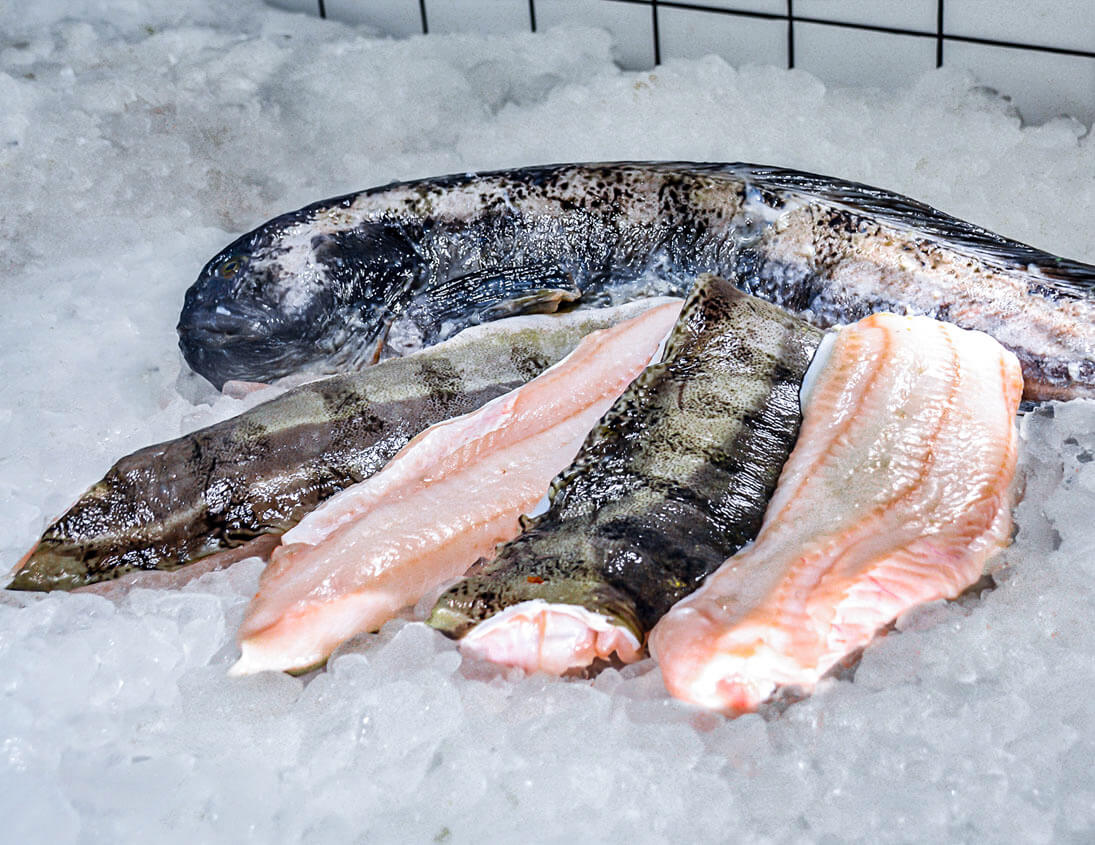 The catfish is mostly a bycatch because it´s a solitary fish. There are 5 existing species but only 2 of them are important for the european market: the grey ( lat. Anarhichas lupus) and the spotted (lat. Anarhichas minor). 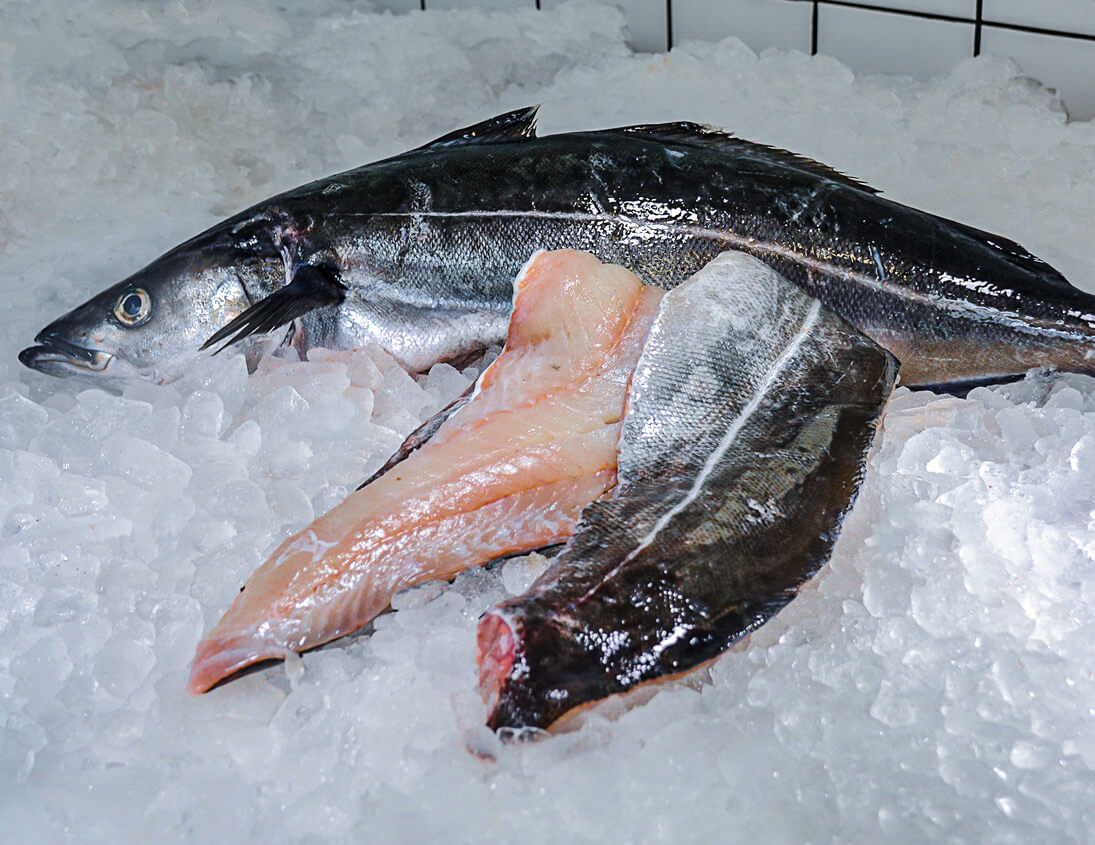 The North Atlantic is the main habitat of the saithe. There it swims in the area around Iceland, Norway and the North Sea and is also located around Great Britain. It is a close relative of the cod. Because of its greyish dark fillet, it wasnt that demanded in former times. Beside Norway and France, the Faroe Islands, Great Britain and Germany belong to the most important suppliers. 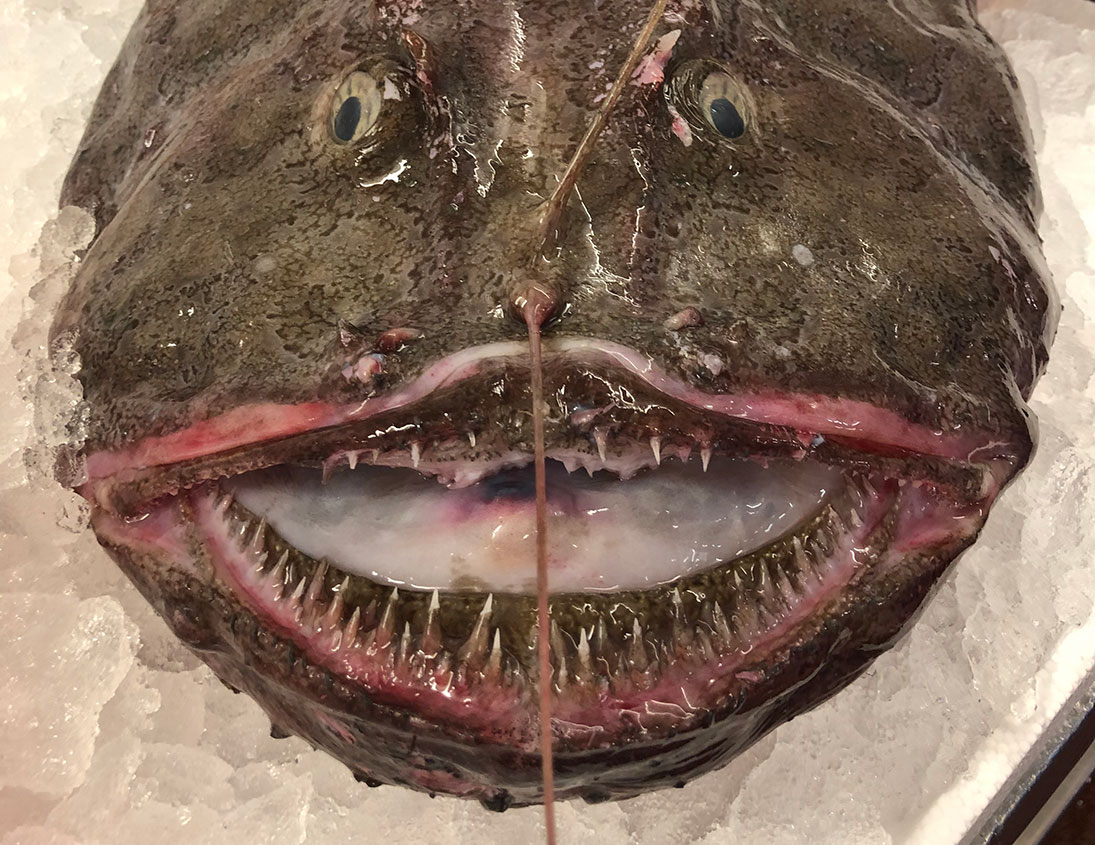 The monkfish, who lures its prey with its dorsal fin, is a delicacy. The soft skin of the monkfish has no scales, but a range of knobs and protuberances. It reaches a weight up to 40 kg, but only reaches a length of two metre. The white cheek – and caudalfillet is very solid and most popular. 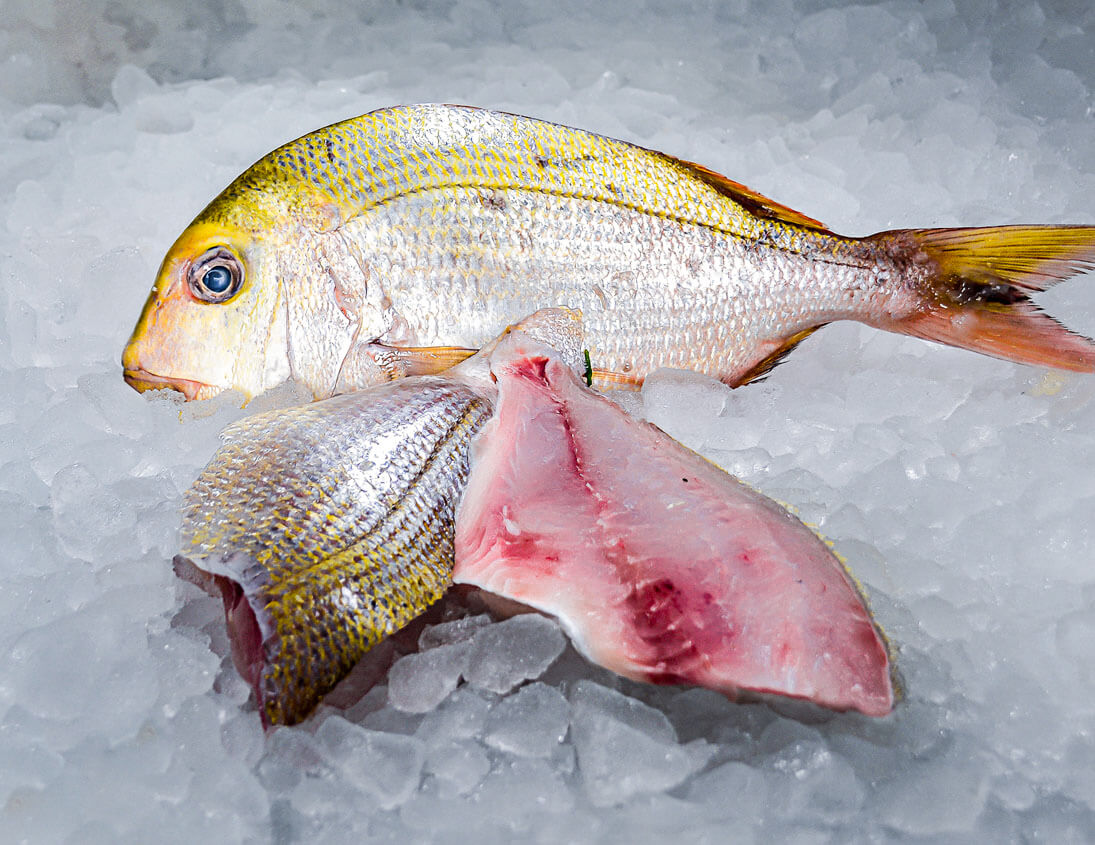 Our gilthead rosé belongs to the family of the seabream, which is very popular for taste of the meat.

The fresh taste of the gilthead is as various as the appearance. Since the antiquity, the gilthead freshly made, is considered to be a delicate speciality. It is the typical fish of the Mediterranean Sea, but is also found in the Atlantic Ocean. The fish, which we tend to serve fried or grilled over here, stems mostly from aquacultures. Thats how stocks are saved efficient and economic, similar to the salmon hatchery. The fresh gilthead, with its tender taste and recognizable condiment, became a significant economic component of the fish farming. Aquacultures tend to breed the species of fish, that enjoy great popularity in vacation areas around the coast. 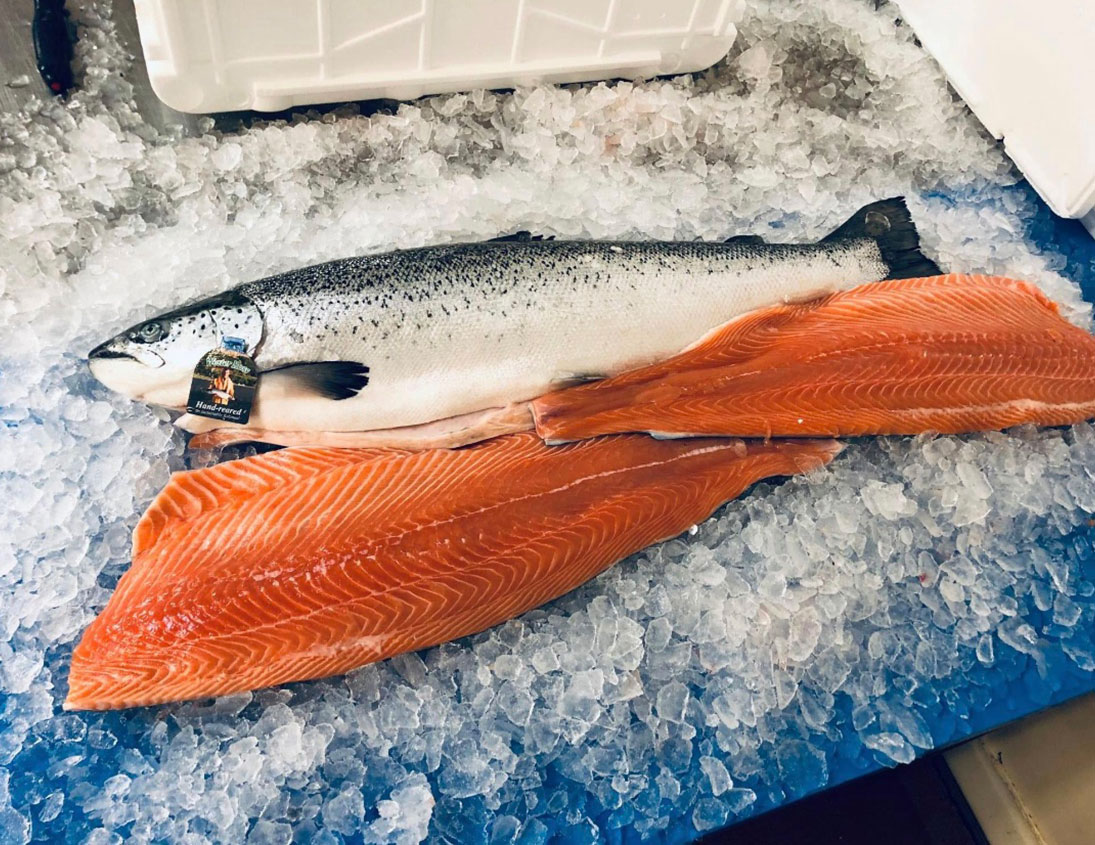 Wild Salmon is extremely rare, that is why farm fish from Norway, Scotland and Ireland are mainly traded here. Salmons are anadromous migrating fish. They use rivers and streams (freshwater) to spawn. After that they return to the ocean (saltwater). The breeder simulate this life cycle of the young. They grow them in fresh water and after one year they´re relocated to sea water. 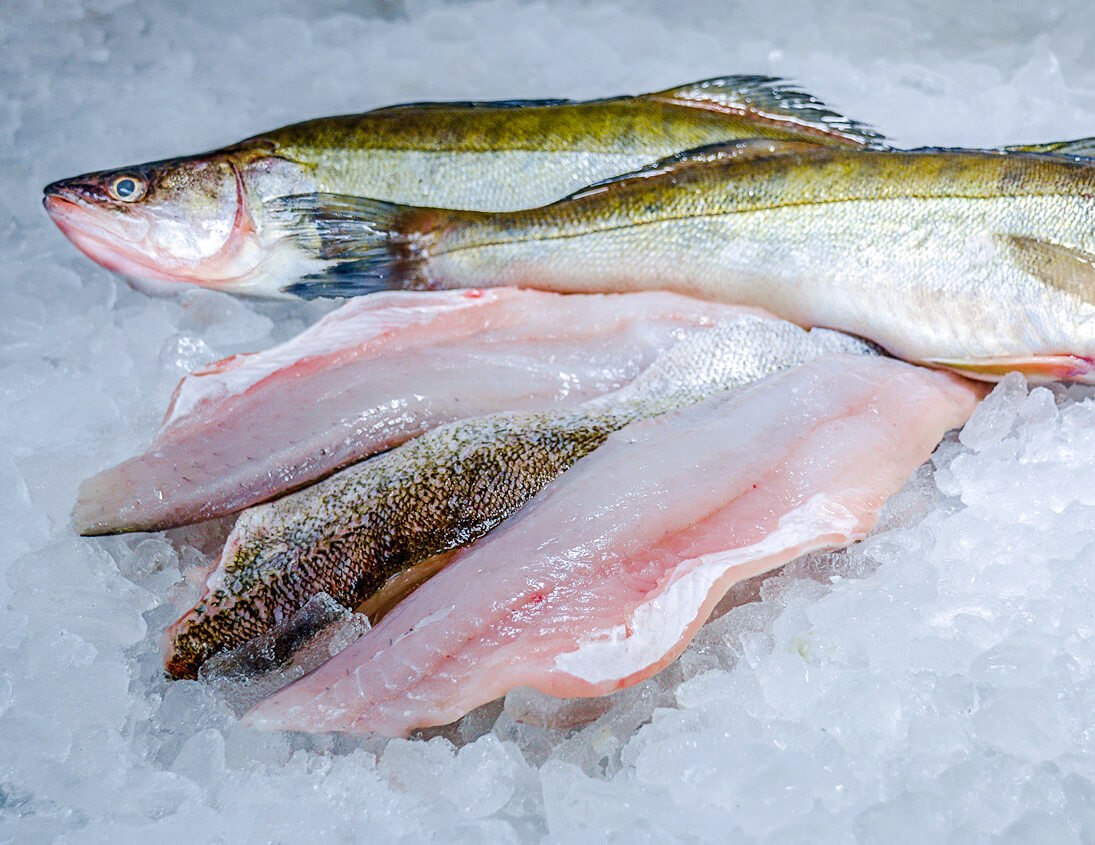 Sander, with its tenderly and lean fillet, is successfully breeded, because it is one of the most demanded and economically significant fresh water fish. Our Sander is a product of the german Baltic Sea! 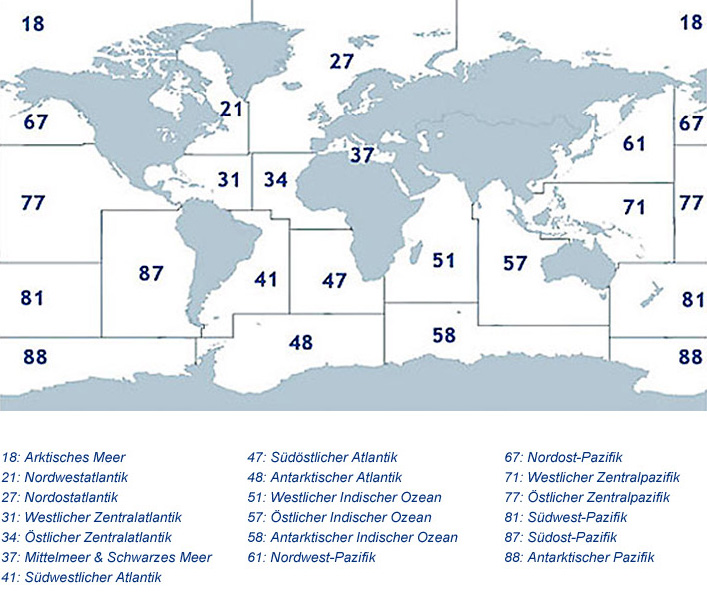